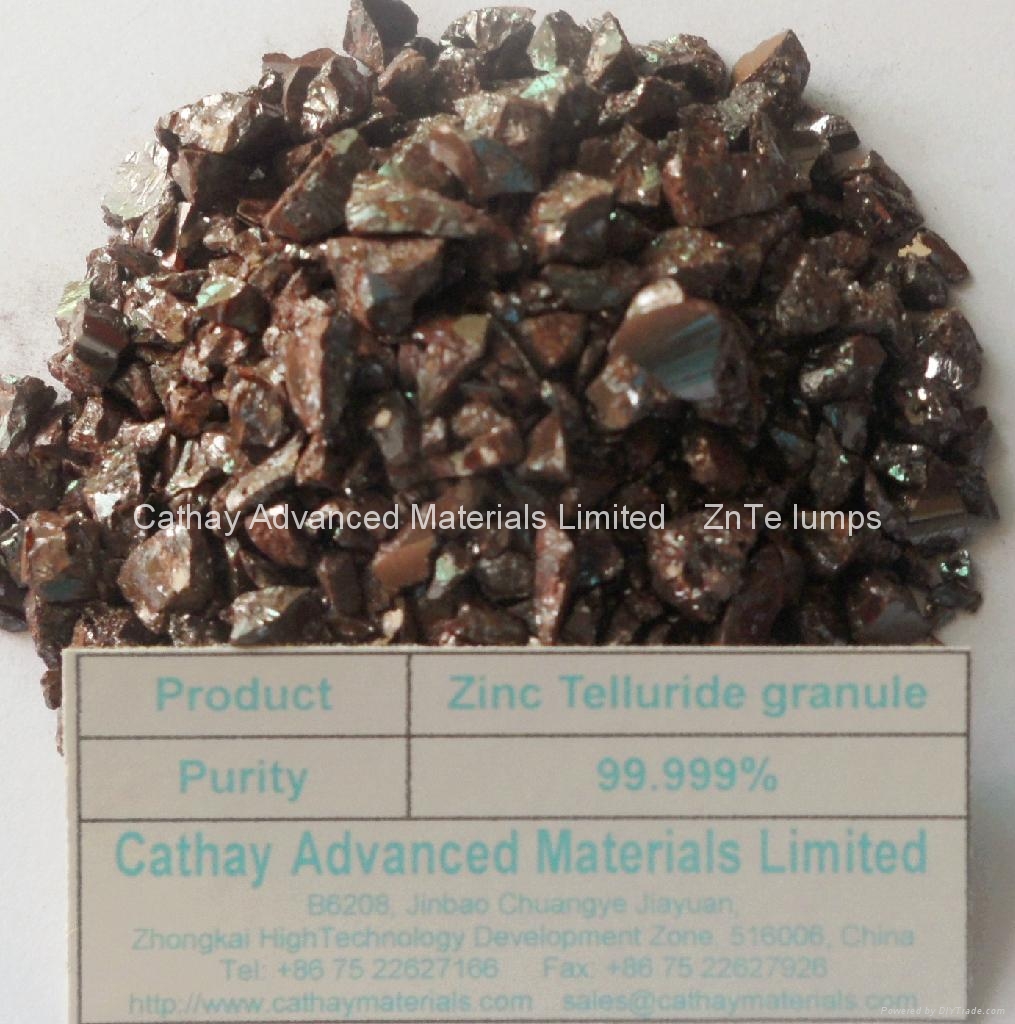 ZnTe has the appearance of grey or brownish-red powder, or ruby-red crystals when refined by sublimation. Zinc telluride typically had a cubic (sphalerite, or "zincblende") crystal structure, but can be also prepared as hexagonal crystals (wurzite structure). Irradiated by a strong optical beam burns in presence of oxygen. Its lattice constant is 0.61034 nm, allowing it to be grown with or on aluminum antimonide. gallium antimonide, indium antimonide, and lead selenide. With some lattice mismatch, it can also be grown on other substrates such as GaAs and it can be grown in thin-film polycrystalline (or nanocrystalline) form on substrates such as glass, for example, in the manufacture of thin-film solar cells. In the wurtzite (hexagonal) crystal structure, it has lattice parameters a= 0.427 and c=0.699 nm.

Zinc telluride can be easily doped, and for this reason it is one of the more common semiconducting materials used in optoelectronics. ZnTe is important for development of various semiconductor devices, including blue LEDs, laser diodes, solar cells, and components of microwave generators. It can be used for solar cells, for example, as a back-surface field layer and p-type semiconductor material for a CdTe/ZnTe structure or in PIN diode structures.

The material can also be used as a component of ternary semiconductor compounds, such as CdxZn(1-x)Te (conceptually a mixture composed from the end-members ZnTe and CdTe), which can be made with a varying composition x to allow the optical bandgap to be tuned as desired.

Zinc telluride together with lithium niobate is often used for generation of pulsed terahertz radiation in time-domain terahertz spectroscopy and terahertz imaging. When a crystal of such material is subjected to a high-intensity light pulse of  subpicosecond duration, it emits a pulse of terahertz frequency through a nonlinear optical process called optical rectification. Conversely, subjecting a zinc telluride crystal to terahertz radiation causes it to show optical birefringence and change the polarization of a transmitting light, making it an electro-optic detector.

Vanadium-doped zinc telluride, "ZnTe:V", is a non-linear optical photorefractive material of possible use in the protection of sensors at visible wavelengths. ZnTe:V optical limiters are light and compact, without complicated optics of conventional limiters. ZnTe:V can block a high-intensity jamming beam from a laser dazzler, while still passing the lower-intensity image of the observed scene. It can also be used in holographic interferometry, in reconfigurable optical interconnections, and in laser optical phase conjugation devices. It offers superior photorefractive performance at wavelengths between 600–1300 nm, in comparison with other III-V and II-VI compound semiconductors. By adding manganese as an additional dopant (ZnTe:V:Mn), its photorefractive yield can be significantly increased.